Rollout of the first prototype 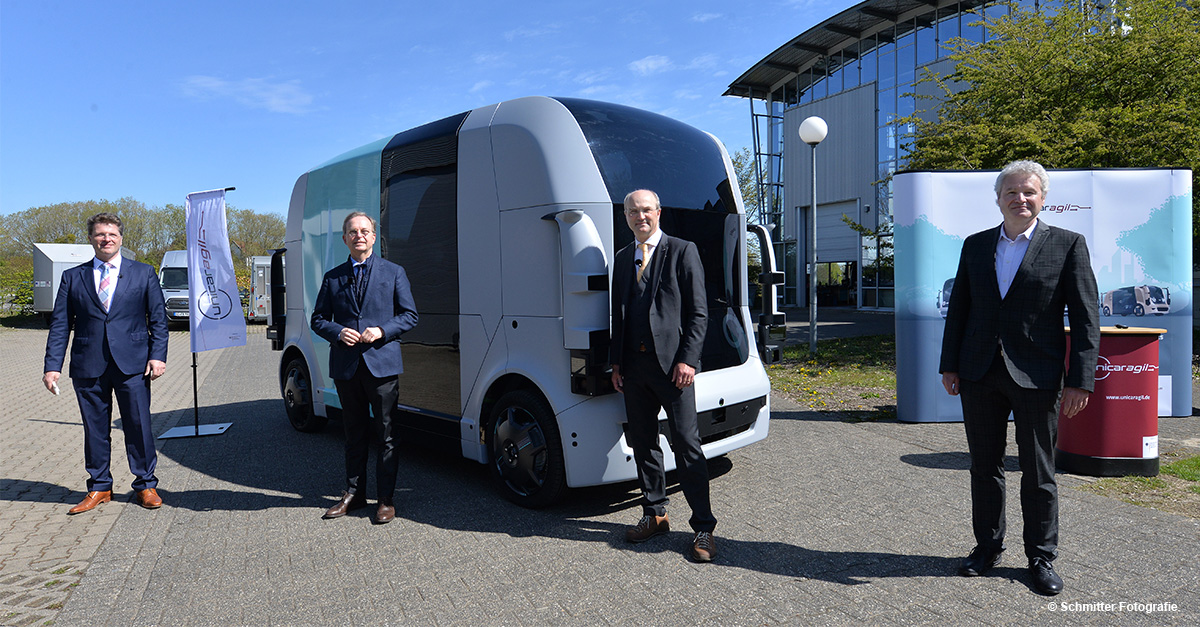 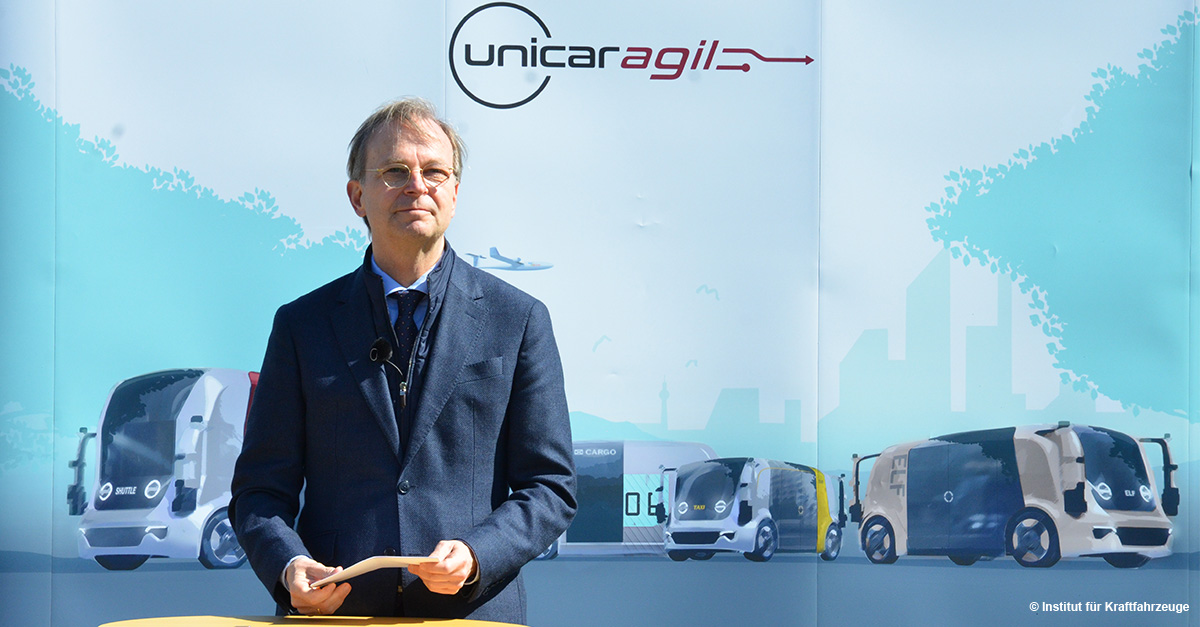 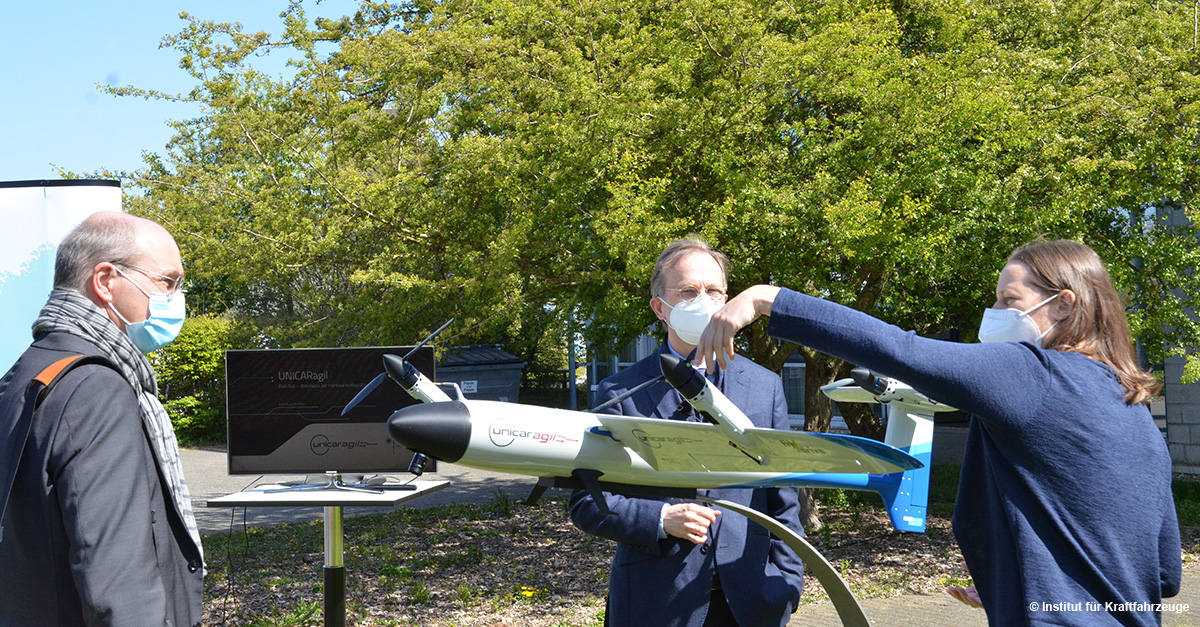 After three years of intensive work, the time has finally come - the first prototype is standing on its own wheels. At the rollout on Tuesday, April 27, 2021, the first vehicle of the UNICARagil family was able to leave the workshop halls of the ika with its very own power. In the last few weeks, the driving platform was combined with a corresponding add-on module and the electrical on-board network as well as the drives were integrated. As a result, this prototype is now available for testing the automated driving functions, with three more vehicles set to follow in the near future for other applications. This is a major milestone in the UNICARagil project. This important event in the development of modular automated and driverless vehicles will be digitally processed according to the current situation in order to be presented to the public and the project advisory board and consortium afterwards.

With the completion of hardware integration, an important milestone has been reached. The ready-to-run platform has been married to the add-on module and all mechatronic components required for driving have been integrated. The special feature of this driving platform is its consistent modularity and the integration of novel dynamics modules that implement the drive, brake and steering for each individual wheel with steering angles of up to 90° in an electronically connected manner. This platform builds the basis for various add-on modules. Depending on the intended use of the vehicle, these are customized, for example, for local passenger transport but also for transporting goods. The moving prototype is based on an innovative vehicle structure that was designed and constructed from scratch in this project. Likewise, the electrical/electronic architecture with cerebrum, brain stem and dynamics modules was newly developed, designed and manufactured as part of the project, including dedicated control units for drive and steering control. Accordingly, the rollout was eagerly awaited within the project consortium.

Due to the current pandemic situation, not all project participants were able to come together and experience this milestone live, as is usually the case during a rollout. For the time to being, the first vehicle was only allowed to travel its first meters on its own wheels in a small group - the more than 100 project team members, the project advisory board and interested fellow citizens experienced the rollout digitally.

UNICARagil is making an important contribution to shaping the mobility of tomorrow. In the project, fully automated and driverless vehicles are being researched and four different variants are being prototyped. The research work focuses on novel hardware and software architectures to realize fully driverless vehicles and to be able to continuously update their driving functions. The first driving prototype gives an idea of the possibilities that will emerge on the basis of the modular architecture.

Thomas Rachel, Parliamentary State Secretary at the German Federal Ministry of Education and Research (BMBF), sees trend-setting potential in UNICARagil: "With funding from the BMBF, UNICARagil offers the opportunity to develop disruptive approaches for autonomous driving from research and to test them. Eight universities, in collaboration with project partners from industry, are providing fundamentally new solutions and excellently trained engineers. These will help ensure that autonomous vehicles can not only be driven in Germany in the future, but also built."

The project is now entering a decisive phase. Now that the first prototype is on its own wheels and can move under its own power, other core topics of the project are coming to fruition. The vehicle will be fully automated in the upcoming months. To this end, the sensor modules will be equipped and the cerebrum and brain stem integrated and connected. The software and automated driving functions created in the project will gradually be put into operation and tested and proven in extensive driving trials. The issue of safety plays a prominent role in the project. The interiors will then be added towards the end of the project.

Published on behalf of the rector of the Rheinisch-Westfälischen Tech­nischen Hochschule (RWTH) Aachen.

You have declined cookies. This decision can be reversed.

You have allowed cookies to be placed on your computer. This decision can be reversed.